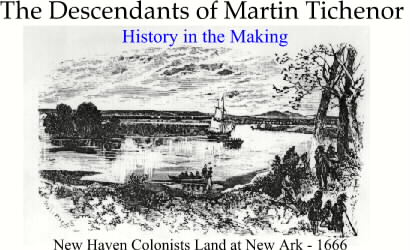 Martin Tichenor and his many descendants have a rich history in America. Tichenor descendants have participated in every great event in European - American history for the last 350 years, and are destined to continue this tradition for the next 350 years. If you have name similar to Tichenor, then there is a good chance that you too are a descendant of Martin too.

The first known record of Martin Tichenor is when he took an oath of allegiance at New Haven Colony in August 1644. He was married by the governor of New Haven to Mary Charles, daughter of John Charles, may 16, 1651. Their 8 children, Nathaniel, Sarah, John, Abigail, Daniel, Hannah, Samuel and Jonathan were the native born Americans that fostered thousands of Tichenors in America. Their descendants can be found in every state of the Union with last name variations of Tichenor, such as Teachenor, Tichinel, Tichnell, Tishner, Titchenal, Titchenell, Titchnell and possibly others unknown to us.

In 1665 New Haven and Connecticut were merged into one colony. Martin and a group of 30 other Puritan families, under the leadership of John Treat, found the religious environment in Connecticut intolerable and left New Haven in 1666 to found Newark N.J. This was the first of many history making events in which Tichenors participated.

A rough count of all thirteen generations since Martin total over 20,000 different names and about 5,100 current descendants using one of the many spelling variations of the name Tichenor. Based on telephone connections in America today, the Tichenor families are spread all over America. 78 of the families live in the NORTHEAST, 24 still live in NEW JERSEY, 17 in PENNSYLVANIA, 111 in the SOUTHEAST, 339 in the GREAT LAKES region, 139 in the Central area and 152 in the PACIFIC COAST area. Imagine all these descendants are just from Martin and Mary Tichenor, who were married in 1651.

The Map below shows how Tichenors have spread throughout the United States over the last 350 years. Note that Kentucky is the state with the most Tichenors with about 1 in 1000 names in the state being related to a Tichenor. Over 50,000 last names are listed in a database on the net. To see if other names of interest to you are available...click on the map.

If you would like more information on the Descendants of Martin Tichenor, a excellent resource is the Tichenor Families In America. Published by Harold Tichenor